Forget about buzzwords, it’s the concepts behind Makerspaces that school libraries should focus on 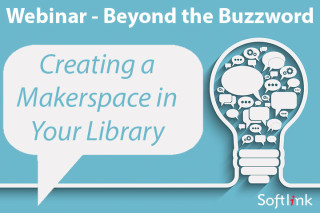 Softlink was privileged to have Kay Oddone speak about Makerspaces as part of our ongoing webinar series for school libraries in Australia and New Zealand.

Kay is an experienced speaker and workshop facilitator, with over 18 years’ experience in Education.

In her position as Librarian for ResourceLink, Brisbane Catholic Education’s information and resourcing centre, Kay supported the staff of all 137 schools and 6 head office locations. She has developed Makerspace programs and resources as well as facilitated workshops on the topic.

I first met Kay in 2015 when Nikki Curtis (Softlink’s Marketing Manager) and I interviewed her for a video case study on the innovative ways that ResourceLink are using Oliver v5 (you can watch Kay’s videos here and here). She showed us a number of the creative Makerspace resources that were on offer to Brisbane Catholic Education Office schools and to say Nikki and I were “engaged students” is understating our experience – we had such a fun day! The idea of having Kay share her knowledge on the topic of Makerspaces had been swirling around in our plans since.

It was no surprise then that Kay’s reputation, combined with the subject matter, proved to be popular with the region’s school library community as we had close to 180 registrations for the event, one of our largest webinars yet!

Kay began the discussion by looking at whether the time, energy and money that go into setting up a Makerspace is worth it for school libraries, or if they are just a fad that will soon fade away.

‘My first response to this question is that it is completely right to be hesitant before diving headlong into a new venture; however after much reading and thinking, I believe that while the buzzword ‘makerspace’ may lose importance, the concepts underpinning them are valuable and have been so long before this current focus, and will continue for long after.’

So what does Kay consider a Makerspace?

“It is a place of belonging, innovation, learning, engagement, discovery, creativity and community; it’s a place where learning is inter-disciplinary and hands on. Where students are allowed to fail, because that’s a part of the process. It’s a space that is bigger than any particular part of the curriculum, yet which leads to learning in almost every aspect of the curriculum. It’s a space where learners can come together drawn by interest, not age, and where different skills and talents which may not be recognised in the traditional classroom may be seen, and be developed. To me, this sounds very much like a contemporary library!”

Throughout the webinar, Kay shared her wealth of experience in developing Makerspaces, including advice on how to get started with Makerspaces, including the selection of a space (even suggestions on pop-up and mobile setups), the materials it will be resourced with and the types of activities that are appropriate for different age groups.

Regardless of where you are at in the Makerspace journey, or even where in the world your library is, I highly recommend watching Kay’s presentation as well as checking out some of the suggested resources below.