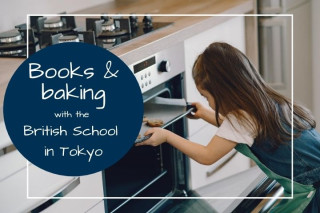 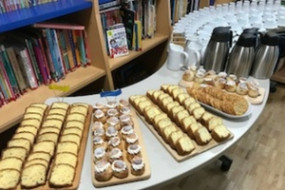 At the British School in Tokyo, librarians Richie Steven and Michael Bell work hard to cultivate a sense of home away from home for the many expat families who join the school community. With an enticing mix of storytelling, information services and delicious food, Richie and Michael have turned the school’s three libraries into buzzing community hubs that attract frequent visits, not just from students but from their families as well! 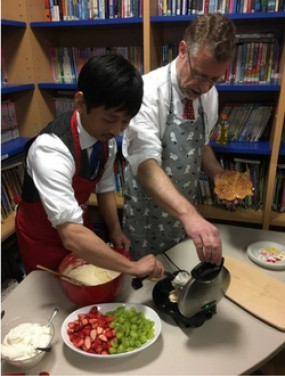 BST caters for over 880 students of 76 different nationalities, ranging in age from 3 to 18 years, across 2 campuses in central Tokyo. One-third of the students are neither British nor Japanese, and many families on international work postings stay for only three years at a time.

With such a diverse and often transient population, librarians Richie and Michael recognised the importance of creating strong community ties within the school. Drawing on their individual backgrounds, the dynamic pair have made the school libraries into vibrant activity centres that welcome students along with their parents, grandparents, relatives, and other community members, and provide essential services to help them overcome the challenges of living away from home.

“Often you might have one parent going out to work, all the children are happy going off to school and one parent sits at home and thinks ‘what am I going to do?’,” Richie said.

“But if parents can come in to school, they can meet other parents in a similar situation, they can talk to each other, network and find out about other things they can do. Parents can become part of a community rather than feeling isolated.”

Michael agreed, “Because it’s an international school, sometimes the parents and families don’t have those kind of community networks, so to a certain extent the school provides that.”

And how exactly do Richie and Michael ensure the parents are happy? Well, in lots of ways.

Firstly, the BST libraries offer a range of services designed specifically with parents in mind. There is an extensive selection of reading materials purchased especially for parents by the PTA, including fiction, non-fiction and subscription magazines from several countries. Parents and other family members can enjoy these resources before and after school hours, as well as reading with their children.

“It’s nice for grandparents to be able to read books in Portuguese or [their native language] to their grandchildren,” Richie said. 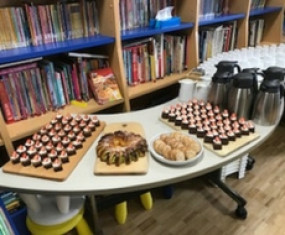 But one of the most original ways the library appeals to young and old alike is via the tastebuds. A former baker in his native Sweden, Richie has the ideal recipe to help build community: cake and coffee. Lots of coffee!

Every Friday all parents from the school are invited to enjoy a coffee morning, where they are treated to Richie’s delicious cakes, while Michael makes coffee non-stop for 3 or 4 hours!

“It’s a really good community time, because when you first come to the school it’s a little bit daunting if you can’t speak Japanese,” Richie said.

For Richie, who grew up speaking two languages, the prospect of joining a culturally diverse, multilingual community was one of the main attractions about becoming a librarian at BST. “I wanted to go somewhere where there were loads of different languages and loads of different cultures and it was an interesting place to be, with lots of challenges,” he told us.

And the British School in Tokyo really seems to fit the bill. According to Richie, “the whole school buzzes about reading and books!”

Fiction is a major focus at BST, and both Richie and Michael feel it is important for students to read plenty of fiction in order to maintain their language skills. 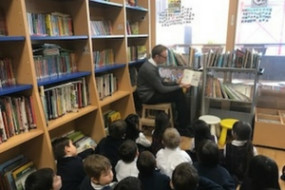 An additional motivator is the school’s participation in the annual Sakura Medal. The competition is open to all international schools in Japan. Students can contribute book reviews and those who read at least five books in any category can vote for their favourite. Categories include picture books, graphic novels, chapter books and others.

“In the last 10 years we’ve won every single year and we intend to win again this year. We’re very competitive!” Richie told us.

When we asked what they liked best about their role, both Richie and Michael were enthusiastic in their response. “We do everything here!” Richie explained. “We do coffee mornings, we have information mornings in the library, parents come in to have a good old gossip, parents come in if they’ve got a problem and they don’t know where to buy things or how to get their visas done, or that type of thing. We’re almost like an advice bureau, at times.

About British School in Tokyo

The British School in Tokyo is an independent K-12 school with two campuses in central Tokyo, Japan. BST uses Oliver v5 as a hosted solution in its three libraries, which cater for students in early years (ages 3-7), primary, and secondary schools respectively. Further information about how BST uses Oliver v5 is available in this case study.