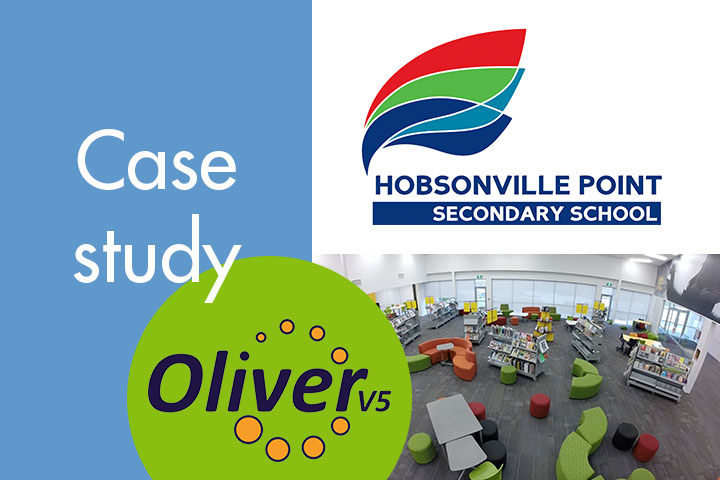 The versatility of Oliver v5 is staggering really, compared to what we had been using. 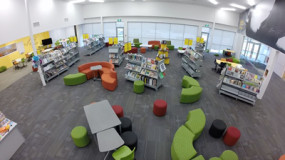 Hobsonville Point Schools are located in a new development on the former Hobsonville air base in Auckland. The schools are state-of-the-art and designed, both educationally and architecturally, to meet the needs of modern learners and the requirements of the New Zealand Curriculum. They provide exciting spaces to work in for both staff and students.

The Primary School opened in February 2013 with the Secondary School following in February 2014. It will progressively cater for Year 9-13 students, having starting with Year 9 students in 2014.

The school had originally chosen another library management system to open with.

Hobsonville Point Schools Past Teacher Librarian, Georgi de Stigter, said it quickly became obvious that the system they were using wasn’t truly web-based and couldn’t provide the necessary tools they required for their contemporary educational offering.

After persevering for twelve months they chose to look for a different solution to effectively manage the needs of their growing and progressive schools.

“We had to think hard about our decision to invest in a new system so quickly and to make sure it was going to be absolutely beneficial for us," Georgi said.

After a detailed evaluation, Oliver v5 was implemented at both Hobsonville Point Schools at the end of 2014. 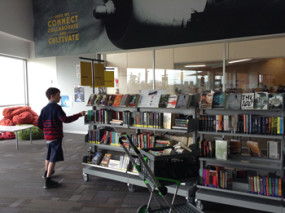 While the schools have a combination of print based and digital resources, the educational structure at both campuses is completely digital. They required an online system that could work across all of their different operating systems.

“We needed to be web-based, there was no way around it. Moving forward, I couldn’t imagine using a library system that wasn’t. With Oliver v5 we saw that demonstrated really well."

Hobsonville Point Schools also required an interface that was user-friendly and could be easily adjusted to meet their specific needs.

“We wanted advanced features, but it also needed to be easy to use."

Orbit, the junior and middle school interface for Oliver v5 was another attractive feature.

“Oliver v5 stood out because it had both a senior and junior interface, we knew it was going to be very versatile for us."

Integration with their student management system Kamar and Single Sign-On was imperative for the schools.

“We wanted it to be easy for our staff and students to access what is a really useful and valuable resource for them."

All of their systems, including Google apps, are now linked under the one sign-on.

As well as providing an advanced digital platform for library and resource management, Oliver v5 is being used to manage school assets by the secondary school’s different departments. For example, the Science department’s scientific equipment and the Food Technology department’s kitchen equipment.

“The versatility of Oliver v5 is staggering really, compared to what we had been using."

Hobsonville Point Schools also appreciated the professionalism with which their transition to Oliver v5 was handled.

“I put a lot of emphasis on customer service, and the promptness of replies right through the transition period was fabulous."

The school was impressed with the Softlink team’s knowledge, capability and service level.

“When the technical team got involved everything was explained really clearly. I think it went as smoothly as it could possibly have gone." 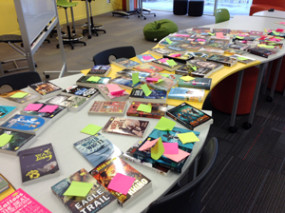 Four months into using Oliver v5 the team at Hobsonville Point appreciate the changes that it has made to their schools.

“Features like Z-Cataloguing, the circulation desk functionality and the ease at which we can apply different permission levels to different users, have made our job a lot easier," Georgi said.

Hobsonville Point Schools are excited about using the serials feature, which handles magazines in Oliver v5 and has been a lot more intuitive than what they were using with their previous system.

“The schools operate collaboratively so the multiple branch capability is perfect for us."

With Oliver v5, Hobsonville Point Schools can provide 24/7 access from anywhere on any device as well as access to their catalogue through a self-checkout machine that is available to the school community.

Single Sign-On integration has been effective in encouraging staff and students to access the library and resources.

Georgi said that with Oliver v5 the team now smile a lot more!

“We like using it, we use it all the time and if it can be done in Oliver v5 we won’t try to do it somewhere else which is what we had to do with our previous system."

Oliver v5 allows Hobsonville Point Schools to provide the innovative educational experience that is so important to them.

“Oliver v5 is a future-focused library system and if you want that, and that is where your school is going, this is the system to choose."

Learn more about Oliver v5 by watching these short videos