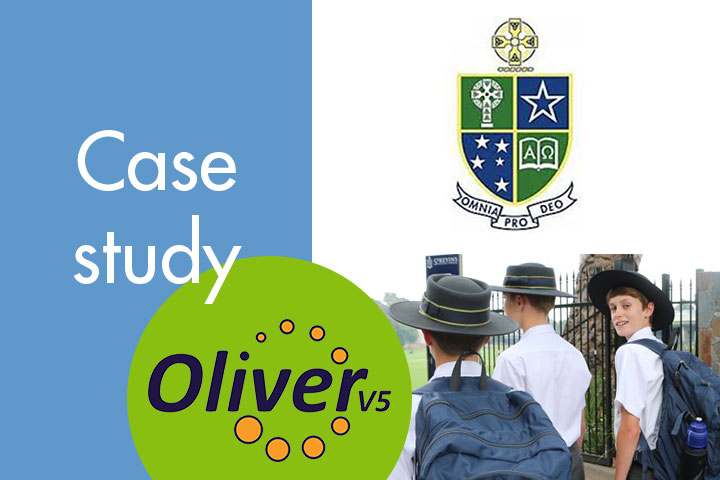 Oliver v5 is more intuitive than any comparative system I’ve seen before.

St Kevin’s College Toorak was founded in 1918 by the Christian Brothers. The college quickly outgrew the original East Melbourne facilities and relocated to Toorak in 1932. It has since grown to a three campus Prep – 12 school committed to the Christian education of young men in the tradition of Edmund Rice.

The College will be celebrating their Centenary in 2018.

In 2016, St Kevin’s College Toorak introduced Oliver v5 to manage resources and services at each of their three campus libraries.

Head of Library and Information Services, Richard Wartho, said that their previous system was a decade old and needed replacing.

“Our existing system was outdated and Windows based, reporting was also difficult. We needed a new web-based system that was easy to manage and could generate the reports we need."

Richard evaluated a number of systems before choosing Oliver v5.

Getting the IT Department involved early

Richard said that while features and ease of use was important, it was vital that the College’s IT department was on board with the decision.

A short list was provided to the Head of IT who reviewed each supplier and system and after meeting with Softlink representatives at a conference decided that Oliver v5 was the best option for St Kevin’s
College Toorak.

“Our Head of IT spoke to Softlink representatives about the system and reviewed the technical capabilities, the responses made him feel confident it was the best option for us moving forward."

Having the IT Department on side had a significant bearing on Richard’s decision to implement Oliver v5.

“If I had chosen a system solely on the features I wanted, but it turned out to be too complicated or something that the IT department wasn’t confident with, it would have caused problems, we needed a system that could meet everybody’s needs."

The first step in the Oliver v5 implementation process was to provide Softlink with an overview of the library’s existing systems and data.

“Our library team was able to provide responses to the broader topics, and we got our IT department involved with the more technical questions. The combined effort and ownership of the system implementation made everything move forward very smoothly."

Richard organised for his entire library team to receive on-site training for Oliver v5 during the testing stage.

“It was before the system went live and that was really beneficial. The trainer suggested topics we should cover. By the end of that first day we all felt pretty confident using the system."

A second training day was conducted with the library staff shortly before go-live to reinforce their knowledge and system confidence.

Broader staff and students at St Kevin’s College Toorak weren’t provided with any formal training before go-live, but Richard said that the transition for users was seamless.

“One of the advantages of Oliver v5 is that the search interface, which is 95% of what non-library staff use, is so straight forward that it wasn’t even an issue."

Richard said that St Kevin’s College Toorak have seen a number of benefits since going live with Oliver v5.

“Having an online search portal makes it very easy for staff and students to search the catalogue, the authentication is all sorted out and students use the same login they use for everything else."

The library staff have also noticed the benefits.

Richard said the whole circulation system and running reports is much more straight-forward.

In addition the team at St Kevin’s College Toorak is finding cataloguing much easier, especially the Z Cataloguing functionality.

“Oliver v5 is more intuitive than any comparative system I’ve seen before. From a management perspective most things are very efficient, you can add users very easily and changing due dates is another good example."

To learn more about implementing Oliver v5, visit these resources